Patrick Leclercq worked for a waste-sorting company for years, where he came in contact with toxic waste. He still works there as a foreman, even though his work is undoubtedly the reason he became ill in 2011.

When he started working there as a young man, he was unaware of the risks involved in his profession. Furthermore, safety standards at that time were much less stringent than they are now. Patrick sometimes neglected to wear his protective mask when decanting hazardous substances. For years, he inhaled the fumes without suffering consequences.

However, in 2011, Patrick's daughters, who are nurses, thought he didn't look well and convinced him to have a blood test. The results showed that the number of platelets and white blood cells in his blood had fallen considerably. Patrick went to the Jolimont hospital in La Louvière where he was treated by Dr. Delrieu, a hematologist. He was diagnosed with myelodysplastic syndrome, a bone marrow disorder that disrupts the production of red blood cells, white blood cells and platelets.

Patrick's health initially improved and stabilized but in 2014, he suffered a severe psychological shock when his sister died suddenly. Patrick's hematologist then discovered a loss of chromosome 7 and found that the illness had evolved into acute leukemia. Patrick stopped working immediately and had to undergo a bone marrow transplant to save his life. Without a transplant, he would only have a year to live.

Patrick looked for a suitable donor among his immediate family. Unfortunately, neither his brother nor any other family member was compatible. Consequently, Dr. Delrieu contacted the Marrow Donor Program Belgium registry and the international stem cell bank, which has 31 million registered donors.

Three months later, a suitable donor was found in the international donor bank. However, the donor, who was an 80% match with Patrick, remained anonymous. All Patrick knew was that the donor was Polish. On December 4, three months after a compatible donor was found, Patrick underwent a bone marrow transplant and chemotherapy. He stayed in a sterile room for a month and was allowed to leave hospital in late December, extremely weak and very thin. "My face had aged 20 years," he said.

Patrick had to take cortisone-based anti-rejection medication because his body rejected the transplant. His treatment continued for two years. It wasn't until August 1, 2016 that he could return to work and go back to his normal life. He put weight back on, exercised and started feeling better.

Patrick is now in remission and feels in good shape thanks to the transplant and the various treatments. 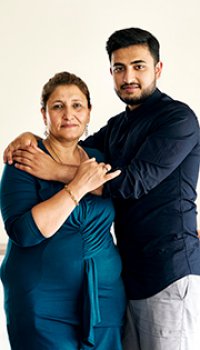 The websites of Red Cross-Flanders use cookies to help make your visit as smooth as possible. We install necessary and technical cookies to ensure the websites run properly. We also use analytical and advertising cookies to measure and improve the general use of the websites. Indicate below whether you agree to this {policy_link} in order to continue.